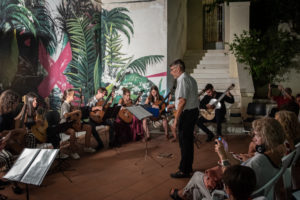 Hermoupolis Guitar Festival was worthy of facing the current situation that significantly limit the work of culture, managing to adapt its program without “disagreements” and to offer unique musical moments to its friends for the 27th year.

The concerts of this year’s event, from 27 to 31 July 2021, took place in the courtyard of the Labor Center of Cyclades, which best served the needs of the festival, while contributing to the return to natural sound.

“Holding the events in this difficult time for everyone was admittedly a challenge for us, as special manipulations are required to control the people, the performers and everyday detail”, said to “Koini Gnomi” the artistic director of the Hermoupolis Guitar Festival, Angelos Nikolopoulos. As he characteristically mentioned, due to the separation that should be made between the vaccinated and the unvaccinated, the two scheduled concerts at the Apollo Theater took place like the others at the Labor Center. “The whole festival was held in a single place, which proved to be ideal”, noted Mr. Nikolopoulos, giving special emphasis to his excellent acoustics. “We did not use any microphones in the yard of the Labor Center. Everyone listened perfectly to everything that was played there and that was something that worked in their favor. We heard the natural sound such as the instruments without amplification, as in most open-air events, microphones are used, so the sound is altered to some extent “.

Apart from the functionality of the space and the controls, the online reservation system that was followed performed just as well. “Although there was more interest, for security reasons, the audience was limited to around 70 people to keep the required distances. We were full every night, while the respective cancellation system helped us put in the concerts and people who expressed the desire to attend them “.

The lessons of the festival took place in the meeting room of the Labor Center with open windows and distances. In this year’s cycle participated 30 children from all over Greece divided into sections of 5-10 people. The lessons were held in order and specific appointments in order to avoid synchronicity.

The highlights of this year’s event 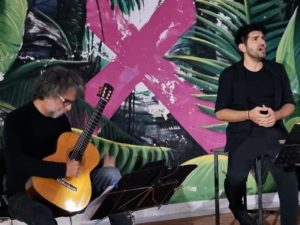 The program of the 27th Ermoupolis Guitar Festival opened on Tuesday, July 27, with “12 Madrigalia” by Michalis Tranoudakis, in poetry by an unknown Cypriot of the 16th century. The cycle of songs, which is also of literary interest due to the timeless poetic power of the texts, was presented for the first time in the courtyard of the Labor Center of the Cyclades by Nikos Hatzieleftheriou and Dimitris Voutsas.

According to Mr. Nikolopoulos, “it seemed that even in the confinement we all experienced, there were people who took advantage of it creatively to make and suggest something new. This work was much loved by the public “.

On Thursday, July 29, a solo recital was held by the Syrian Angeliki Doulgeri who attended the lessons of the Ermoupolis Guitar Festival 5-6 years ago. She then moved to Athens to study sociology, attended music studies, received her degree and through this year’s event made her first public appearance. “For our part, we wanted to give a step to a child from Syros to gain experience and be able to transmit what he knows to other children of the island in the future. It is nice that the place itself shows its talents “, said the artistic director of the Festival. 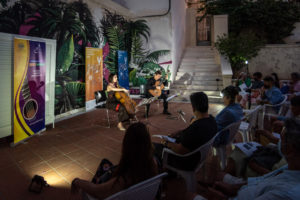 Among the strong moments of this year’s event is the concert that took place on Friday, July 30, in collaboration with the Embassy of Austria. Christina Bazili and Daniel Marx presented works for cello and guitar, among them some were heard for the first time.

“We are very happy that in our program this year we had the first global performances”, concluded Mr. Nikolopoulos, who renews his appointment with the friends of the festival for the summer of 2022.