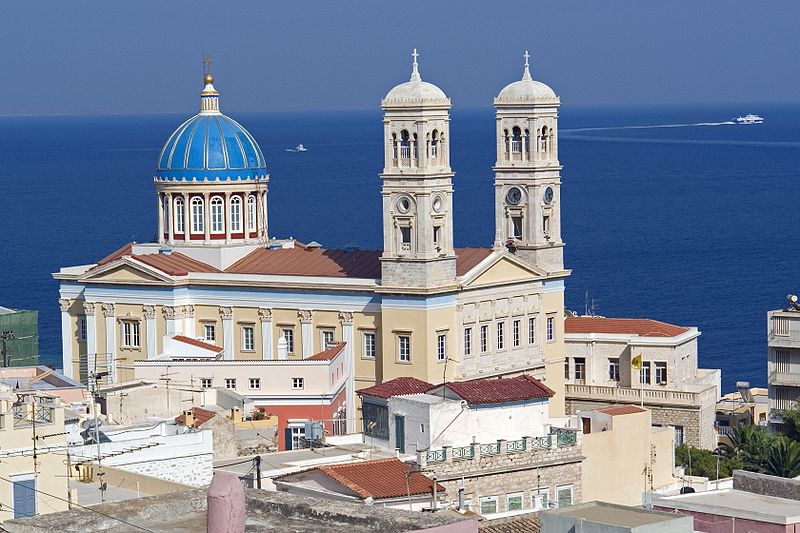 Hermoupolis was founded within the blaze of the Greek Revolution in 1821, as an extension to the existing Ano Syros township, by refugees who fled from Chios, Psara, Kydonia, Kassos and elsewhere to save their lives from the Turkish massacre.

It soon became the leading commercial and industrial center of Greece, as well as its main port.
Compared favorably with Paris in a poem by I. Lagadakis (1905), the city of Hermoupolis is a watershed in contemporary Greek history: the first city in the new Greece. During the entire 19th century it presided over the nation’s economic and political life.

The first colonists in 1821 came from Smyrni and Aivali, followed by those from Chios and Psara and every corner of Greece. Along with the Greeks, many foreigners also chose to reside here.

In 1825 the new city had already been born.
On the hillsides above the port new houses were being built.

From 1822, Syros and Mykonos comprised the ‘Eparchy (Province) of Mykonos and Syros’. In spite of the appointment of a Greek Politarchy, the French refused to accept any Greek high-governing body on the island, preferring their king, as of old.

For the duration of the revolution, efforts were continued to organize the city and its builders supported the struggle for freedom in a variety of ways.

In 1824 the first church, the Church of the Metamorphosis, was being constructed. The new city’s baptisms were held in its garden.

Concerning the ceremonial occasion of the naming of the city, the Prime Minister Loukas Rallis (himself a native of Chios) writes:
” With the others I stood and said…Gentlemen under the protection of Hermes…this city was founded and prospered …
Justly and properly therefore I believe it should be dedicated to Hermes and named Hermoupolis. -Hermoupolis, Hermoupolis the voices resounded everywhere…”

Under Kapodistria, Hermoupolis had 13,805 residents and it had evolved into a seat of government:
it had a Commercial Court of Law, Post Office (one of Greece’s first), insurance brokerages, the first Public Schools etc.

In 1831 Syros played a prominent role in the establishment of the ! Constitution.
The acme of Syros began during the reign of Othona.
The first mayor, Yiorgios Petritsis, was elected in 1835.

In 1858 Hermoupolis could boast of the first telegraph office. As befitted a commercial and manufacturing center, the city hosted the Embassies and Consulates of France, England, Italy the Netherlands and Scandinavian countries.

From 1837, the urban design was entrusted to the engineer W. Von Weiller and the city filled with marble buildings.
In 1824, the city acquires the largest Greek Sanitarium.
In 1854, cholera and a series of other epidemics unfortunately plunged Syros into mourning.
A number of charitable institutions for Public Health and Social Services were established during this period: Orphanages, poorhouses and the not-to-be-excepted mental hospital.

In 1862 Syros took part again in the struggle for the establishment of = Constitution. Nikolas Leotsakos was killed by Government forces and soor after the de-throning of Othon the town’s plaza Miaouli would be named in h:s honor.

Syros lent her beneficial presence to the Cretan Revolution, providing a hideaway for Crete’s refugees.

In 1868 there was a naval battle in front of the Hermoupolis harbor where, having been pursued there by the Turks, the citizens own ship, the victorious ‘Enosis’ (‘Union’} earned its place in history.

During the entire 19th century, Hermoupolis played a leading role in the country’s affairs, the nation’s second most important city after Athens.
The harbor was bragged about by the town’s proud citizens.

Hermoupolis is the bridge joining Greece with both Europe and the East.

At the same time there was also great activity at the Shipyards. In 1861 the “Greek Steamship Co.” opened its steam-powered foundry, later known as ‘Neorion’ (dry dock) and’Mechanourgio’ (engine works) of Syros.

In 1860, Alexander Dumas’ entrusted the construction of his imiolia, the ‘Monte Christo’, to Syrians.

Syros succeeded in becoming the central marketplace of Greece, supplying merchandise throughout Greece as well as to Egypt, Syria, and Turkey. For more than fifty years it was the center of the transport trade.
Industries were at a peak of activity, including tanneries, foundries and flour industries.

Industrial Syros was characterized by prototype factory installations; also, there were many Guilds and Associations.

The National Bank’s first branch office was established in Hermoupolis in 1845.
This period of greatness lasted until 1860, at which time the clouds of decline began to gather and the citizen of Hermoupolis conferred to find solutions to save their city.

Towards the end of the 19th century, after 1860 and especially after the Balkan wars, Hermoupolis (and Syros, generally) was in a period of decline.
And the city’s cultural and spiritual life was especially full of vitality. The first Gymnasium, established under Neophyto Vamva, was a spiritual beacon, along with the various other public and private schools:
in Hermoupolis every type of school from kindergarten on up to higher educational institutions was available.
The creation of a library and an archaeological museum were among the first important activities of the citizens.

‘The history of the theatre in Hermoupolis is concurrent with the founding of :he city, highlighted by the October 30, 1861 decision of the Town Council to :uild the combined Theater and Club in the central square.”
In Tales of Syros by the great local author Emmanuel Roidi, you can read about the cultural affairs of the 19th century.
The charming and, at the same time, caustic pen of Roidi will take you on a ourney back in time…