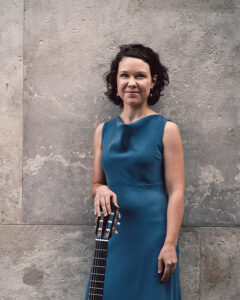 Melanie Hosp is an Austrian professional guitarist with numerous successes at national and international guitar competitions.
Her musical career was strongly shaped and supported by Michael Andreas Haas, Dr. Stefan Hackl at the Tyrolian Conservatory and finally Prof. Alvaro Pierri at the Vienna University of Music and Dramatic Arts, where she graduated with honors respectively.
During her studies she won an award for a scholarship from the Dr. Robert and Lina Thyll Dürr Foundation and she was a member of the “Live Music Now” organization founded by Yehudi Menuhin.

Melanie Hosp teaches classical guitar in Linz and regularly performs in both solo and chamber music concerts in Austria and also internationally, for example she gave concerts at the Cesky Krumlov Festival/Czech Republic or in China, Taiwan, (together with „Gitarrissima“).
She`s a member of several ensembles such as „Duo Silverchord“ (fl./git.), Duo Hosp-Palier, (git./git.) and „Melanie Hosp Quartett“ (git./p./e-bass/dr.).

With the support of Austrian Embassy in Athens