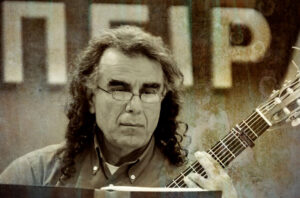 He was born in Athens. He studied guitar at Hellenic Conservatory with Charalambos Ekmetsoglou. He received his degree with Excellent unanimously, after distinction and his diploma with Excellent unanimously and first prize. He attended seminars with great teachers, such as Alfonso Borgese, Alvaro Company, Leo Brower, David Grimes, John Scofield and others. He has been professor at Hellenic Conservatory since 1977.

He has taught at the Central Greek Conservatory and in the branches of Moschato, Chalandri, Koukaki, Kypriadou, Nea Smyrni, Chalkida, Neo Psychiko and Koropi. Also, at the Kallithea Conservatory and at the Piraeus Music School. Many of his students make careers as teachers and soloists in Greece, Cyprus and Serbia.

He has given many solo recitals in Athens and the province, as well as in Serbia and Bulgaria, as part of the International Festival of European Culture.

He is a founding member of the Athenian Guitar Trio.